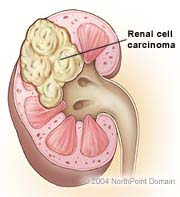 Kidney cancer arises when kidney cells start to grow at an unusually fast rate and become masses known as tumors. The choice of treatment for kidney cancer depends on the extent to which the disease has spread, the aggressiveness of the tumor, and the patient’s lifestyle considerations.Surgical procedures for kidney cancer include:

Treatments for cancer when it has spread include:

WHEN IS IT INDICATED?

Nephrectomy is the mainstay of kidney cancer therapy for most cancer stages. Immunotherapy, chemotherapy, and radiation therapy are indicated when cancer has spread beyond the kidneys.

Surgery: The patient is instructed to stop taking aspirin 1 week prior to the procedure and to avoid eating or drinking anything after midnight the night before.

Immunotherapy: Because researchers believe that interferron alpha-2a, one of the two medications used in immunotherapy, may increase the risk of depression, the patient will be asked about any history of depression.

Radical nephrectomy: The surgeon removes the kidney and the surrounding tissue, often including the adrenal gland through an open incision. Radical nephrectomy may be combined with removal of nearby lymph nodes to ensure that cancer has not spread outside of the kidney region.

Following the procedure, the patient may remain in the hospital for 5 to 7 days; recuperation may take 6 weeks.

The patient will remain in the hospital for up to 7 days and require 6 weeks of recuperation time.

The patient remains in the hospital for 3 days; recuperation takes about 2 to 4 weeks.

Immunotherapy: Patients receive high doses of immunotherapy drugs in the hospital because they may experience severe side effects, such as chills, fever, nausea, vomiting, and loss of appetite. Low-dose regimens are given in an outpatient setting.

Chemotherapy: Chemotherapy drugs destroy cancer cells or damage them in a way that will prevent them from multiplying and are injected or given in pill form.

Radiation therapy: Radiation therapy, the use of high-energy rays to prevent cancer cells from multiplying, is only occasionally used with kidney cancer patients whose health is too poor to undergo surgery.

Tests to check for cancer recurrence include:

Chemotherapy: Side effects of chemotherapy include: