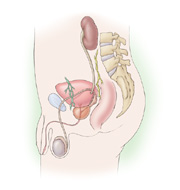 Urologists offer treatment for many forms of male and female sexual dysfunction, which include:

Both men and women experiencing sexual problems may benefit from talking to a psychiatrist, psychologist, marriage counselor, or sex therapist to explore any psychological basis for their sexual difficulties.

Because of possible interactions with medications, the patient should report any other medications that he or she is taking to a physician prior to undergoing medication treatment.

Two other ED medications for erectile dysfunction, vardenafil (Levitra) and tadalafil (Cialis), act in a similar way to Viagra, but their effect is prolonged.

Other treatments for ED include:

Priapism. Priapism is an abnormal erection that is unaccompanied by sexual desire and that causes the penis to remain erect for a long period of time. Priapism is rare, but when it occurs, it needs to be addressed quickly.

To reduce a priaptic erection, a physician removes blood from the corpora cavernosa chambers and then injects 250 to 500 milligrams (mg) of phenylephrine, epinephrine, or norepinephrine.

In some cases an arterial rupture must be repaired to slow the flow of blood into the penis. To slow blood flow, the physician may perform a procedure called unilateral transcatheter embolization to block the pudendal artery, one of the arteries that supplies blood to the penis.

When priapism results from an intracavernous injection for ED, oral doses of a drug known as terbutaline may relieve rigidity.

Decreased libido. Treatment of low libido, or sexual desire, in men and women often focuses on underlying medical conditions, such as diabetes or thyroid disease.

If low hormone levels are a cause of lowered libido, a physician may determine that supplemental hormone therapy is appropriate.
Another common cause of low libido is medication use. If this is determined to be the cause, a physician will review a patient’s medications and, if possible, make substitutions for the drugs that can cause sexual dysfunction.

When no physical cause can be found for a decreased interest in sex, psychological factors, such as stress and anxiety, must be considered.

Premature and retrograde ejaculation. Premature ejaculation is usually a problem for younger men and can be solved if a man teaches himself how to control his sexual response, such as grabbing the head of the penis before he feels the need to ejaculate. An antidepressant called sertraline can also be taken for a short while since it has a side effect of delayed ejaculation.

Peyronie’s disease. In Peyronie’s disease, scar tissue forms in the shaft of the penis, causing the penis to curve during erection. The goal of treatment is to allow the patient to have normal sexual relations.

Sometimes medications, such as vitamin E, Potaba (aminobenzoate potassium), and colchicine, can help control inflammation in the early stages of Peyronie’s disease.

Surgery is the best means to correct Peyronie’s, but it can damage nerves and cause ED. Despite this risk, however, one-third of Peyronie’s patients opt for one of the following surgeries:

These surgical procedures are typically performed on an outpatient basis using general or local anesthesia.

Painful intercourse. Some treatment methods may include:

ED. Some minor side effects of Viagra, Levitra, or Cialis include:

Vacuum constriction devices may cause:

Potential risks of prosthetic implants include loss of sensation, infection, and penis scarring.

Priapism. Complications from the injection treatment of priapism include:

Given the many risk factors for sexual dysfunction, it is important to maintain good health habits to prevent disease and manage existing disease. Positive health practices include eating a balanced diet that is low in saturated fat and rich in fiber and antioxidants, exercising regularly, quitting smoking, and drinking alcohol in moderation.