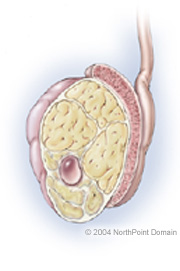 Testicular cancer begins when healthy cells start to grow at an unusually fast rate in one or both testicles. This increased tissue growth eventually produces masses known as tumors.

Treatment for testicular cancer consists of:

WHEN IS IT INDICATED?

The choice of treatments depends on how early the tumor is detected, its size, type, and the overall physical condition of the patient. Physicians also need to determine if a cancer is localized (confined to the organ in which cancer started) or metastatic (growing both in the original starting place and spreading elsewhere in the body).

Testicular cancer is treated once a physician has positively diagnosed the cancer through an examination that uses ultrasound and measured protein levels in the blood (called serum markers). If caught early in its development, testicular cancer is almost always treatable.

Orchiectomy. Before undergoing an orchiectomy procedure, a physician may order one or more of the following:

Chemotherapy. The patient’s blood cell count will be tested before, during, and after chemotherapy treatment.

Orchiectomy. When men have a cancerous tumor in the testicle, physicians usually recommend removing the testicle.

During an orchiectomy, which requires general anesthesia, the surgeon makes an incision in the groin area, pushes the testicle up, divides the testicle from its blood supply, and removes the testicle through the incision.

The procedure takes from 30 minutes to 1 hour and usually requires an overnight stay in the hospital.

The surgeon can replace a surgically removed testicle with a prosthesis.

An orchiectomy performed before cancer has spread outside of lymph nodes near the testicles has a 95 percent cure rate.

Chemotherapy. If the cancer has spread to other organs, a patient will require chemotherapy, which destroys cancer cells or damages them to prevent continued growth. Chemotherapy drugs for testicular cancer usually include a combination of cisplatin, bleomycin, and etoposide.

Chemotherapy is often performed on a brief inpatient basis. The duration may be several weeks, with rest periods between cycles.

Following a prescribed treatment for testicular cancer, physicians monitor patients’ progress through blood tests and CT scans. If testing reveals that cancer has returned, in most cases there is an excellent chance that another treatment option, or repeat of an earlier treatment, will effectively halt the disease.

Orchiectomy. Following an orchiectomy, the physician will instruct the patient to remain in bed for 24 hours and to wear scrotal support for 2 to 3 days. Patients can resume normal activity after 2 to 3 weeks.

SIDE EFFECTS AND POSSIBLE COMPLICATIONS

Orchiectomy. Following an orchiectomy, a patient may experience one or more of the following complications:

Retroperitoneal lymph node dissection. Possible complications from the procedure include:

Chemotherapy. Side effects for chemotherapy drugs may include:

Some chemotherapy drugs carry the risk of causing long-term side effects such as kidney or lung damage or hearing loss.